Why you should learn data structures and algorithms alongside programming?

If we want our computer system to do something then we need to give it an algorithm. An algorithm is basically a step by step procedure which is used to solve a problem. At first it may sound you a very difficult term but actually, it is something very important and easy. In order to get a job done by the computer system, you have to explain it about the procedure on how to do it.” This part is essentially known as Algorithm.”

Use of Algorithms in Programs.

The programs written by programmer have some certain set of rules and guidelines in order to obtain the desired result.  Any activity you perform, whether it’s solving a computer problem, writing a source code, or innovating new programs ‘ you are utilizing algorithms’.

Sometimes developers generate their own algorithms to solve a problem, and sometimes algorithm uses another algorithm as its part to handle the situation. Now as we all know there are different ways to approach a problem. Some approaches take more time and effort and some don’t. So it purely depends on the knowledge and experience of the programmer or developer on how he implements algorithm best suited for that particular problem. 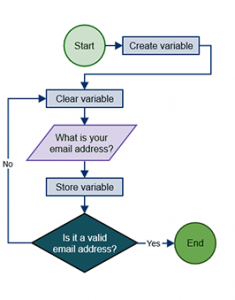 Ways to write an Efficient Algorithm

Let us consider the task of finding a word in a dictionary.

Algorithm 1 – Check every word starting from the first word ( Brute Force Method ). This method is time-consuming as well as it takes more energy too. (Takes 150 seconds)

Algorithm 2 – Follow the indexing given by the good people who wrote the dictionary ( Hashing ).  This method is much more efficient and better as compared to the previous one. (Takes 60 seconds)

In programming, firstly you need to identify what kind of programming language you want to write an algorithm for ? it can be for c, c+ +, Java, Python or anything. Then include the valid syntax into it. By ensuring proper usage of variables and loops. Also, make the use of jump statements as it makes algorithms run smoothly using little space of memory. Also, use the break to terminate the process. The algorithm can be analyzed on the basis of runtime scale with problem size. it is said to be fast and efficient if it takes less time to execute and consumes less memory space.  The performance can be measured on the basis of the following properties :

What is Data Structure?

In simple words, it simply means Data which has some structure. A data structure is a particular way of organizing data in a computer so that it can be used efficiently. Data structures can implement one or more particular abstract data types(ADT), which are the means of specifying the contract of operations and their complexity. In programming, it is used to store a particular type of data in its respective Structure.

Any data structure is designed to organize data to suit a specific purpose so that it can be accessed and worked with in appropriate ways. just like you can put stuff in stacks, queues, heaps, trees, graphs, and buckets – you can do the same thing with data. In computer programming, a data structure may be selected or designed to store data for the purpose of working on it with various algorithms. Different kinds of data structures are suited to different kinds of applications, and some are highly specialized for specific tasks as well.

Usually, efficient data structures are key to designing efficient algorithms. Some formal design methods and programming languages emphasize data structures, rather than algorithms, as the key organizing factor in software design. Data structures can be used to organize the storage and retrieval of information stored in both main memory [RAM] and secondary memory[Hard Disks].

If you have any other suggestion let us know in the comment section below.

9 thoughts on “Why data structures and algorithms are so important for programming?”