Other popular languages included in the TIOBE rankings are Python, C#, and Visual Basic. Further, both Objective-C and Perl have fallen considerably in the year-on-year TIOBE rankings. While Objective-C has been replaced by Swift, the language Perl lacks a clear future.

On the other hand, PYPL (PopularitY of Programming Language), which looks at the popularity of language tutorials on Google, shows Java as the most preferred programming language followed by Python and JavaScript. 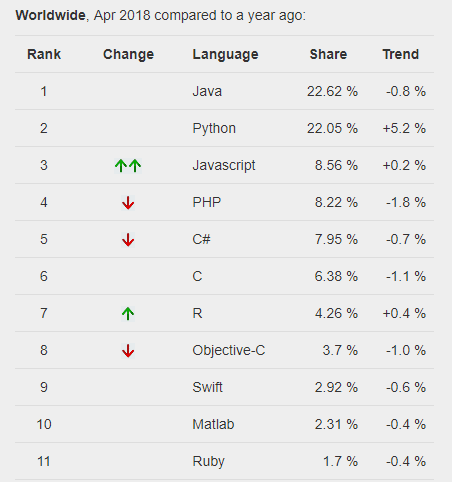 Based on research data as of April 2018, here is the list of the top 10 programming languages in 2018, according to the TIOBE Index and PYPL rankings.

Given below is the description of the programming languages showing in the above list in no particular order:

Java is one of the most popular, most adopted and general-purpose programming language used by millions of developers and billions of devices around the world. It is a class-based, object-oriented language and designed to be portable, which means that you can find it on all platforms, operating systems, and devices. It is used to develop all kinds of Android apps, desktop apps, and video games. It is also commonly used as a server-side language for enterprise-level backend development. This programming language has long-term compatibility and developers are comfortable with Java.

C is the predecessor of C++ and is a simplified and less functional version. C is a compiled, procedural language developed in 1972 by Dennis Ritchie for use in the UNIX operating system. Although originally designed as a systems programming language, C has proved to be a powerful and flexible language that can be used for a variety of applications, from business programs to engineering.

C++ is a general-purpose programming language based on C language. It has imperative, object-oriented and generic programming features. C++ is a powerful, high-performance language used to build system software, games engines and desktop and web apps.

Python is a widely used high-level programming language used for general-purpose programming, as it is simple and readable. Python is the easiest coding language to learn for the first time learners. In order to become a seasoned professional, every beginner should at least know this language.

PHP (Hypertext Pre-Processor) is a server-side programming language, which can be used to create web pages written in HTML. It is used on more than 80 percent of websites today including Facebook, Wikipedia, Tumblr, and WordPress. PHP is not only a popular language among new programmers due to its easy-to-use techniques; it also does offer tons of advanced features for more experienced programmers.

JavaScript is a popular, powerful, dynamic, scripting language that is used to create cool websites and games for the web. It derives much of its syntax from The C Language. JavaScript is compatible across all browsers and is used in over 90 percent of all web pages. In recent years, JavaScript has also gained use as the foundation of Node.js, a server technology that among other things enables real-time communication.

C# is a simple, modern, general-purpose, type-safe, object-oriented programming language. It is intended for use in developing software components suitable for deployment in distributed environments.

SQL is a special-purpose language designed for managing data held in a relational database management system (RDBMS), or for stream processing in a relational data stream management system (RDSMS). It is also very common, with many variations like MySQL and Microsoft SQL. Last year, Microsoft released SQL Server 2016, which introduced several new features to make the language more open-source like integration with R, the popular data analysis programming language, and a Linux version, making it an extremely well-known language.

Swift, the successor of Objective-C is a relatively clean, fast and error-free programming language that can reduce the length of the code, saving time and energy. Built by Apple, Swift is suitable for building applications for iOS, macOS, watchOS, and tvOS. Since it is open source, besides iOS developers can also use it on Windows or Linux systems, design their compilers and be assured that their apps are compatible with Apple devices.

R is an open source programming language and software environment for statistical computing and graphics. It is widely used among statisticians and data miners for developing statistical software and data analysis. It is capable of conducting numerical computations through additional packages.